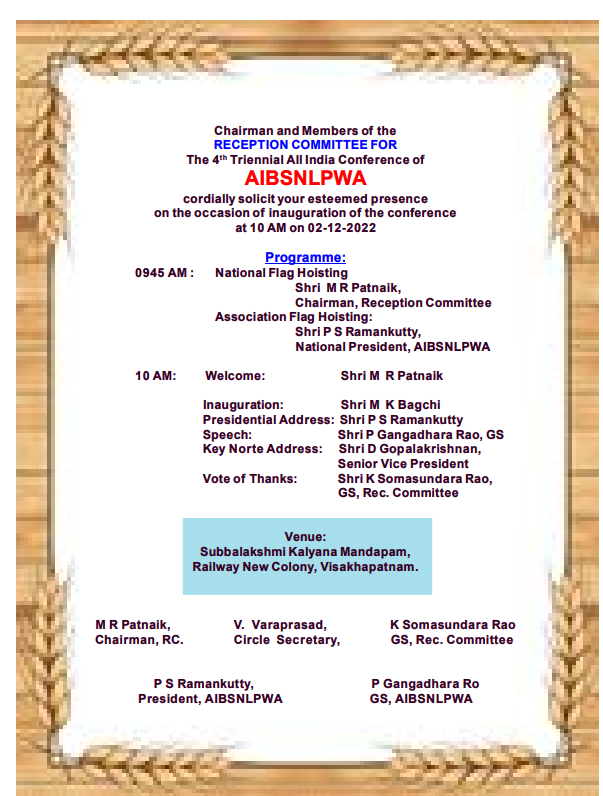 Posted by STR DIVISION at 18:12 No comments:

Our Division President N. Kothandaraman, Division Secretary N.S. Deenadayalan, Treasurer S. Ramkumar, Circle Secretary S. Sundarakrishnan, All India DGS K. Muthiyalu, All India Vice president A. Sugumaran, ADS S. Narasimhan and STR DIVISION DELEGATES and other leaders leaving  today to VISHAKAPATTINAM to attend our ALL INDIA CONFERENCE on 2-12-22 and 3-12-22. Com N. Mohan will be in charge of our Whatsapp Grps and Website during those days.

Posted by STR DIVISION at 17:59 No comments:

CLARIFICATION ON HOTEL ALLOTMENT  AT AIC.

I just  forwarded the  tentative  arrangement of hotels to  all participants.

Please see below, as received from  GS , RC ,  for more clarity about the  procedure that  will be  adopted by RC.  All participants are  required to note Please.

Sir,  hotel allotment to delegates in fact sent for your information only, but you have uploaded in groups.  All delegates from road, rail or air are required to come to control room in meeting venue . Only DS has to come  and submit credentials, pay delegate fee, obtain hotel allotment slip . Then all of them will be dropped at respective hotels. NO HOTEL WILL ADMIT , IF ANYONE GOES DIRECTLY WITHOUT ALLOTMENT SLIP.. Also there may be few cases of change, as we are getting arrival information even  now. Please advise all delegates suitably.

Posted by STR DIVISION at 21:26 No comments:

Dear Comrade, WELCOME to VISAKHAPATTINAM for Participation in 4th AIC and make it a grand success at SUBBALAKSHMI KALYANAMANDAPAM, RAILWAY NEW COLONY.

1.ACCOMODATION is arranged by the Receiption Committee from the morning of 1st Dec to morning of 4th Dec.If any wants accomodation on 30th Nov.as well as 5th Dec, individual  has to bear the expenditure.

4. Day weather is like Chennai but the night and early morning weather is 17 degree. Shawl or Swetter is to be brought for safer side.

8. Please form a group leader to take care of our comrades during train journey.

10.Lady comrades are requested not to wear more valuable jewels.

11.Take care of each one coming in a group.

13. Those who reaches earlier  by 0800 AM can go to VENUE, TAKE Tiffin, we will make arrangement for ALLOTING rooms. Lodges alloted for us are located 1 to 1.5 KM from the conference Venue.

Wish you all a Happy and Comfortable Journey.

DEAR CICLE SECRETARY...  Reference to your NOTE in STR WhatsApp...Appreciate Your Concern for the safety & health of the delegates to the AIC🌹🙏...NK.

Posted by STR DIVISION at 21:24 No comments:

The following DoT letter reveals their clear stand on pension revision. It's totally different from the declaration of Member S on 17/10/22 and subsequently also when some Pensioners associations met him later. Now according to this letter "no delinking but linked with pay revision".  It's not between zero and 15% but only zero percent. How to believe these officers? It's an eye-opener to other associations.Finally the DoT officers have come out in their true colour.

All Heads of Associations

Kind reference is invited towards your letter's received from various Associations regarding Record of Discussion of the meeting held on 17.10.2022.

(i)             In this regard it is intimated that copy of Presentation made during the meeting is hereby attached as requested by you.

(ii)           You have stated that nine associations have pointed out that there are judgments from constitutional courts which state that the combined service pensioners who opted for government pension should be treated on par with the C.G. Pensioners.

In this regard it is stated that on absorption, BSNL/MTNL absorbed employees started getting their pay in Industrial Dearness Allowance (IDA) pay scales. As per sub-rule 8 of rule 37A of CCS (Pension) Rules, 1972, these absorbed employees are eligible for pensionary benefits on the basis of the combined service rendered by them (with the Central Government and with BSNL/MTNL) in accordance with the formula for calculation of pension and family pension under CCS (Pension) Rules, 1972 at the time of their retirement from BSNL/MTNL. The absorbed employees of BSNL/MTNL who retired after 01.10.2000 get pension, and dearness relief thereon, as per IDA pattern.

In OA No. 021/0012/2017 filed by Shri M.S.S.R Murthy before CAT Hyderabad Bench, the Hon 'ble vide CAT observed vide Order dated 10.12.2018 (p.392/c) that "The applicant cannol seek application ofrules selectively, ofboth Government and BSNL, in order to take advantage of the best among the better of the rules in the two institutions. Being a BSNL employee the applicant cannot compare himselfwith DOT enaployee and allege discrimination. One is a Govt. department and the other is a PSU" and dismissed the OA on merit.

(p.398/c) observed that "The applicant having become a BSNL employee his

pension was naturally drawn based on his pay drawn in BSNL. Had the applicant optedför retirement benefits from DOT, the scenario would have been different! However, since the applicant has optedfor combined service, the rules oflhe game are different" and dismissed the RA on merit.

Appeal filed by Sh.Murthy in Hon'ble HC Hyd is pending with no interim directions.

In OA No. 1 70/001 16-134/2018 filed by Shri Vincent Funado & ors before Hon 'ble CAT, Bangalore Bench, the Hon'ble Tribunal dismissed vide order dated 27.1 1.2019 (p.567/c) observed that, "Having elected to be in BSNL, they are now estopped by the impliedpromise that they had given to by BSNL tenets and to grow on it. If BSNL cannot grow on it, naturally the employees will suffer a little diminishment. At this point of time they cannot turn around and say that the DOT employees may have stolen a march over them. As they have already made their choice, they have to abide by it" and dismissed the OA on merit.

(iii)           As far as pension revision of BSNL/MTNL pensioners on combined service, on the basis

of 7Th CPC is concerned, it is clarified that the recommendations of 7th CPC are applicable only to Central Govt. employees who are getting pay/ pension on CDA pattern. Rule 37 (5) of CCS (Pension) Rules, 2021 clearly mentions that the permanent absorption of the Government servants, as employees of the public sector undertaking shall take effect from the date on which their options are accepted by the Government and from the date of such acceptance, such employees shall cease to be Government servants and they shall be deemed to have retired from Government service. Therefore, the orders issued by DoP&PW for revision of pension are not applicable to BSNL/ MTNL retired employees.

(iv)           On delinking pension revision from pay revision in BSNL/MTNL it is clarified that at present the proposal is to revise the pension by merging Basic+IDA as on 01.01.2017 without any fitment factor for pensioners as well as future retirees, who are working at present. However, as and when pay revision as per Yd PRC takes place in BSNL/MTNL the same fitment factor which is extended to serving employees will be given to pensioners.

(v)             Further, as majority of combined service pensioners are Non-Executives and DPE decides pay scales of executives only, BSNL/MTNL have been requested to provide the pay scales of Non-executives, if decision has been taken, so that total financial implications can be computed before sending the proposal to DOE.

Under Secretary to Govt. of India

The Reaction by the General

Secretary is not in conformity with

our position of unified approach

up a demand with logical/relevant

back-up, while some other

Associations have their own

demands. Now that A Situation has

arisen which is not according to our

that Pension Revision is on its way in

whichever way it is settled. I am

certain that As the largest

Association, We are the Main Stake-

Holder in bringing about multiple

pressures by way of Meeting with

Various Political Parties and even the

Minister on a couple of

occasions...The Time Has Come For

Us To Clinch The Issue Of Pension

Revision. Under this circumstance

Our Association has to play the LEAD

ROLE in circumventing all the

difficulties. AFTER ALL WE INTEND

TO BRING ABOUT MONETARY

BENEFITS to the BSNL PENSIONERS.

Let us Reap The Harvest as the

Posted by STR DIVISION at 18:36 No comments: 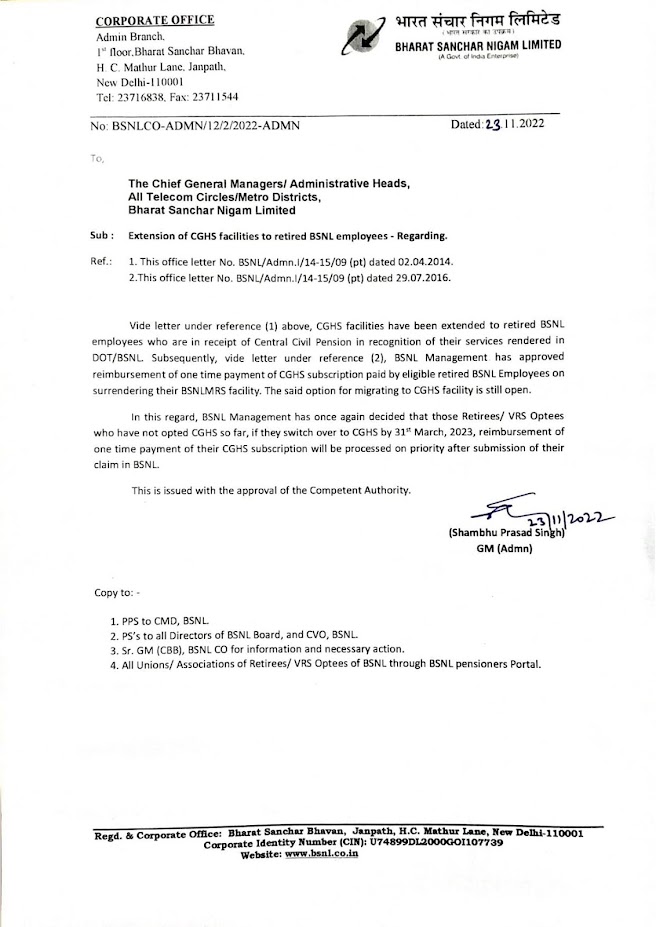 Posted by STR DIVISION at 20:51 No comments:

to be selected and correct PPO & Aadhar number to be uploaded.

(i) Sanctioning Authority as "Telecom"

Posted by STR DIVISION at 18:49 No comments:

We have published two lists of 6935 Sampann Migrated Pensioners in 148 pages on 11-11-22 in our STR DN whatsapp grp. One list is in PDF FORMAT and another one is in word format.  Members requested us to release the MIGRATED SAMPANN PENSIONERS LIST in  ALPHABATICAL order so that they can see easily see their names with new PPOs and LIFE CERTIFICATE DUE DATES etc. So we have now published the sampann migrated pensioners list in ALPHABATICAL order now. See the list below.

Posted by STR DIVISION at 21:36 No comments: 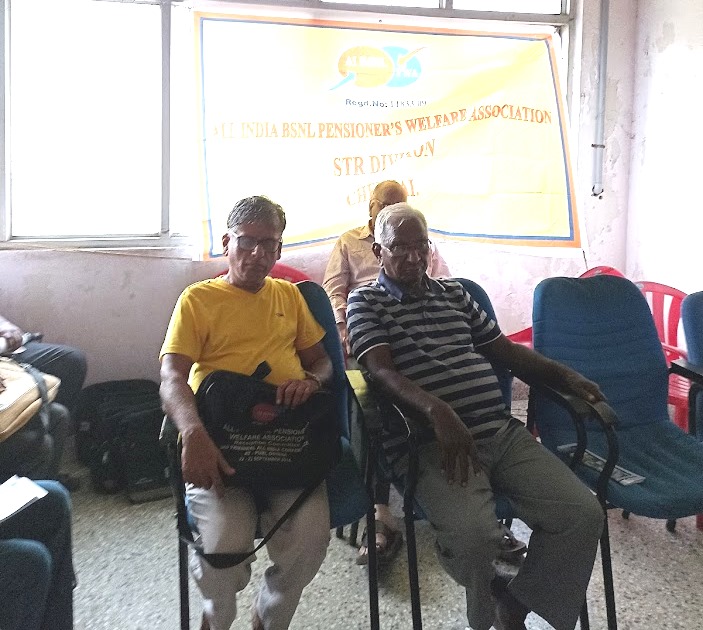 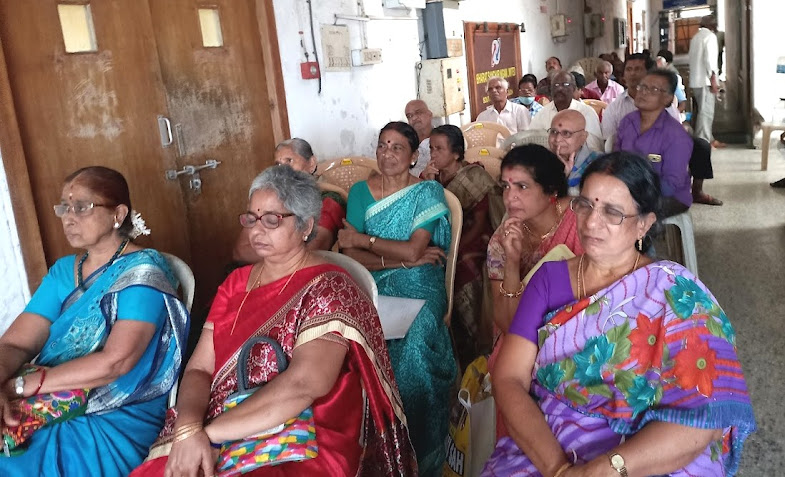 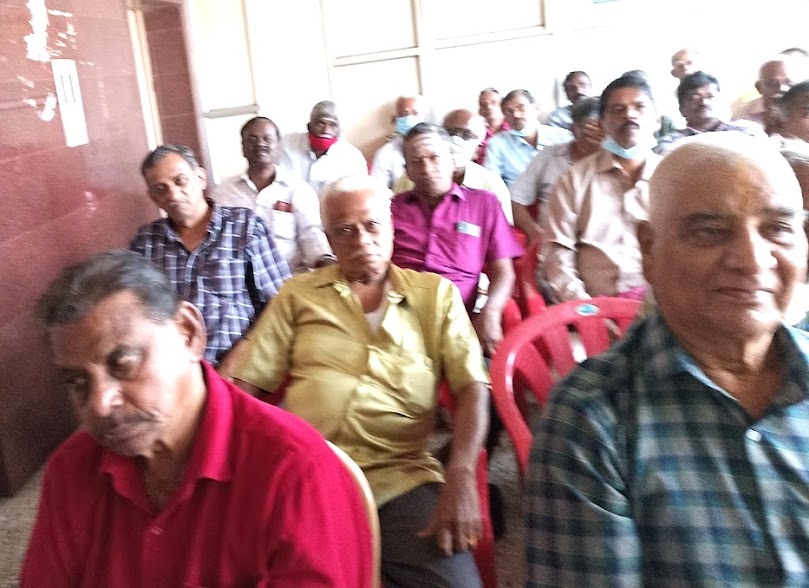 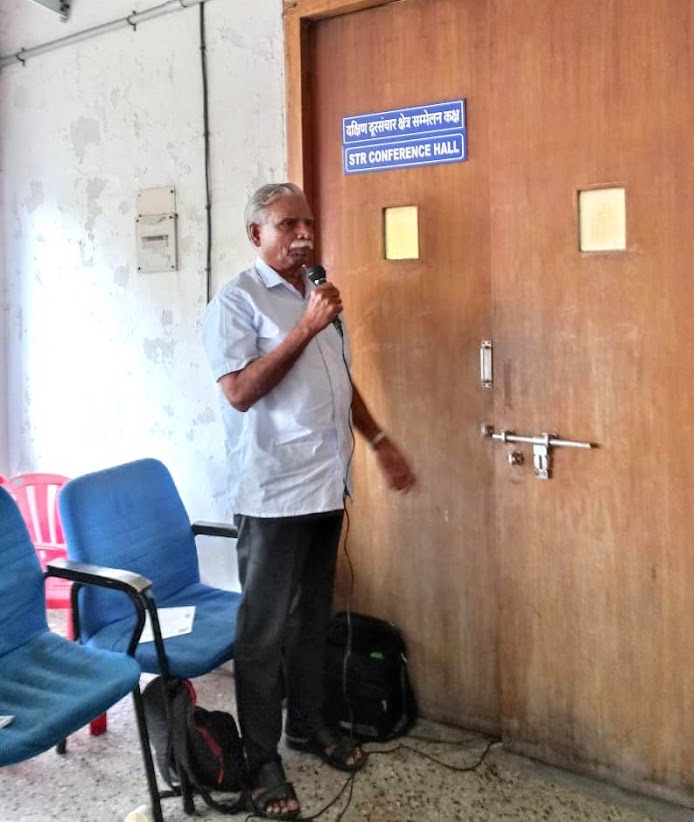 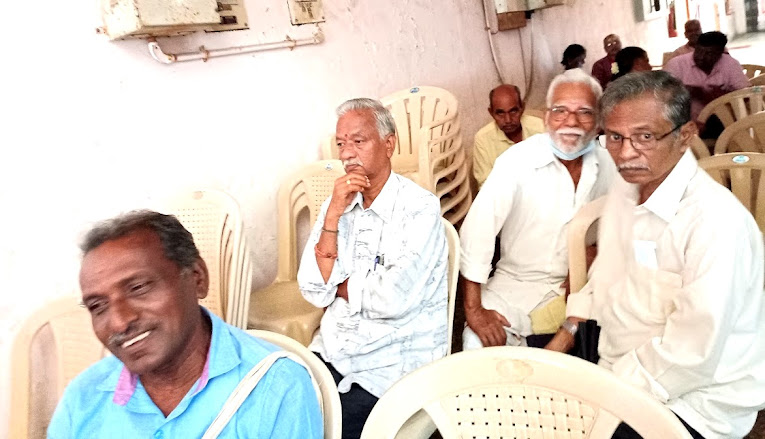 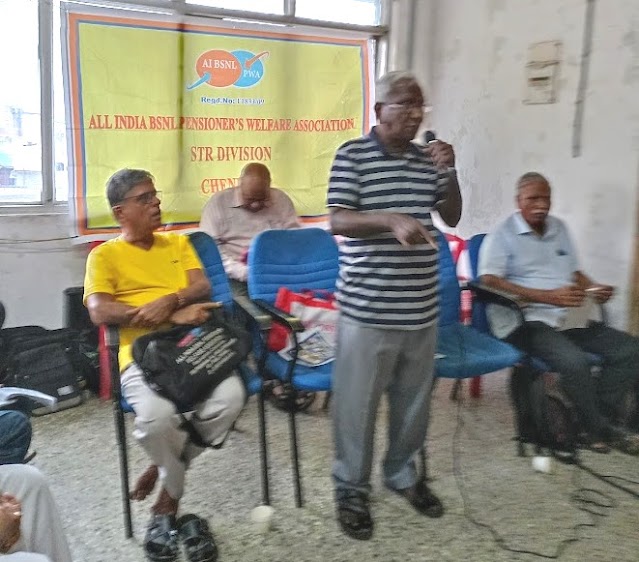 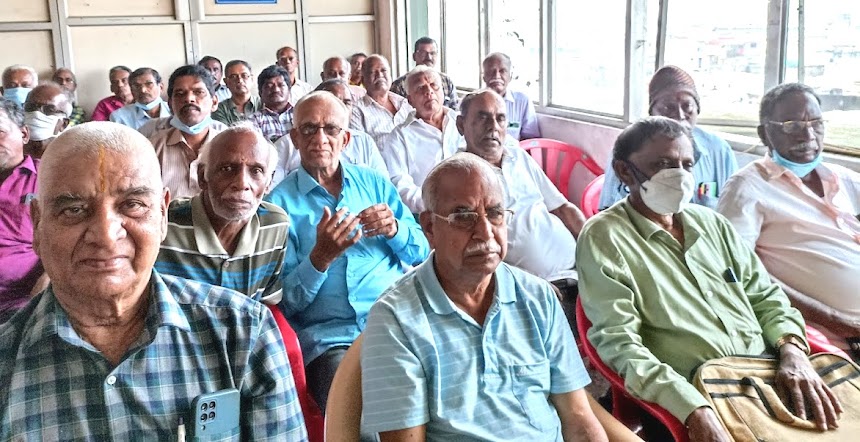