DO NOT CONFUSE CPC REVISION FORMULA WITH
CDA PAY SCALES.
One veteran Telecom Trade union leader has posted a matter in his blog on 26/2/2018.We are not interested in polemics but we have to put the records straight to avoid any confusion among the pensioners and leaders.

Point 1 :   Let us understand that there was no pay revision in 2000. It was only a conversion from CDA pattern to IDA pattern. It was a legal requirement. A three judge division bench of the Apex Court delivered a judgment on 3/5/1990 and based on the judgment, DPE issued OM dated 12/6/1990.Para 3 of that OM states that “All appointments made on or after 1/1/1989 in respect of all categories of employees of PSEs would be deemed to have been governed by the IDA pay scales and IDA.  Appropriate pay scales on the IDA patterns for employees appointed on or after 1/1/1989 may be formulated by the PSEs concerned, in consultation with the administrative ministry and referred to DPE for approval. DPE vide its OM dated 10/8/2009 reiterated and emphasized that appointments including promotion on or after 1/1/1989 in CDA scales of pay have to be in IDA scales of pay.

Point 2 :  Wage revision for executives in BSNL in 2007 was on the basis of 2nd PRC report and for non-executives, on the basis of bilateral agreement signed on 7/5/2010 and order issued on the same date. But pension revision order was issued only on 15/3/2011. Infact DDG (Estt.) wrote a note to DoT finance stating that “revised pay scales are only applicable to those who were still in service as on 1/1/2007.There is no impact on the pensioners who retired before 1/1/2007 on account of revised pay scales. There is no scheme for BSNL with reference to revision of IDA pensioners retired before 1/1/2007”. We have published enough material date-wise in our journals about our efforts to get the pension revision and we need not repeat it here.

Point 3 : Forum leaders met the then Secretary (T) Shri R.K.Garg on 1/5/2015 and discussed 10 items and 78.2 was the 7th item. Breakthrough for annulment of 60:40 did not happen on that day but break through was achieved by us during our discussion on 24/3/2015 and 26/3/2015 (in between on 25/3/2015 there was an internal discussion in DoT). On 26/3/2015  Secretary (T) and Member(F) assured that a revised cabinet note annulling 60:40 would be prepared and circulated within 15 days. Accordingly Establishment section of DoT prepared the revised cabinet note annulling 60:40 on 30/3/2015 and sent it to DoT finance. This was possible because of the direct intervention of Shri. Ananthkumar, Hon. Minister. It is also a fact that this veteran trade union leader met Secretary (T) Shri R.K.Garg on 26/10/2015 and told that annulment of 60:40 has to be dealt separately and the issue of extending the benefit of 78.2% IDA merger to BSNL pensioners retired before 10/6/2013has to be delinked from it. We know success has many fathers.

Point 4 : We are aware that Service Unions/Associations sole objective is to protect the interest of serving employees/officers. They do not have time to go into deep study of pensioners’ problems and suggest a proper solution. It is but natural. The same veteran leader gave an item for discussion in the National Council for revision of medical allowance with pension (instead of pay) plus every April DA and the management advised him to withdraw that item because that is against the interest of pensioners (in this write-up of 26/2/2018 he has mentioned medical advance instead of medical allowance).To settle 78.2% IDA merger for pensioners retired after 1/1/2007 one Association’s GS suggested one day salary arrears for those who retired between 1/1/2007 & 9/6/2013 and GS of another one Union suggested last one month salary. We did not have such confusions. That is why we suggested that let them concentrate on pay revision seriously.

Point 5  :  We are not against struggles and we have conducted several struggles to achieve our demand. We have even supported the recent united strike organized by all the Unions/Associations.

Point 6  : The veteran leader and his association wanted pension revision along with pay revision of BSNL employees. His successor in the union has demanded delinking pension revision from BSNL pay revision. Now Pay revision is not taking place and this leader wants pension revision at 15% of pay plus DA which works out to 32.925% of basic pension (we are demanding 32% of basic pension).From where this 15% theory comes? It is based on 3rd PRC report. That report not only mentions 15% but also 10% & 5%.But it is all for serving employees and not for pensioners. The dictum of Marxism says “Everything will change except the law of change”. We stop with that. We are pretty well aware that today’s pensioners were yesterday’s workers and that today’s workers are tomorrow’s pensioners. Keeping in view the interest of yesterday’s workers and today’s workers only we have demanded 7th CPC pension revision formula as a permanent solution to pension revision. First let there be unity among pensioners’ organizations in BSNL. We have made sincere efforts for that from our side but there is no response from that side. Let us unite on common demand of pensioners and move forward.
------ D Gopalakrishnan 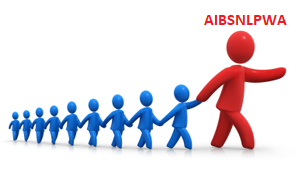